About your humble scribe:

Other Blogs of Interest

Greetings my fellow "Imagination" sovereigns and everyone else as well. I appologize for my and Ludwig's extended absence from this blog. It has been a while since I have been able to post here. They say that 'life' is what happens while you're making other plans and life has happened in abundance. What with the economic downturn, my job here in California has been very much an on again, off again affair. I spent last summer working on the Alaska Railroad. 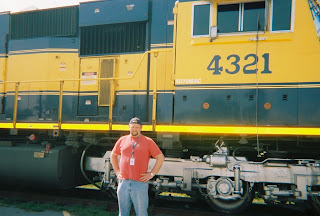 Many of the TMP'ers here might be familiar with Alxbates of "Tales from work" fame. I was able to drop in on him at his bar in Fairbanks while I was up North. After getting back in September and chasing my seniority with Union Pacific Railroad from one end of the State of California to the other, there were all manner of family medical issues to deal with, so my hobby has of neccessity taken a back seat.

Anyways enough about all of that...

I am back and have much painting to do. I have been slowly acquiring Foundry 28mm Prussians for the Ost-Pommern Army. I have about 2/3 of the infantry and the Guard du Corps at 20:1 sitting in boxes under my desk and was ready to dive into painting. Then like most gamers I know, I was distracted by the next big thing, literally. 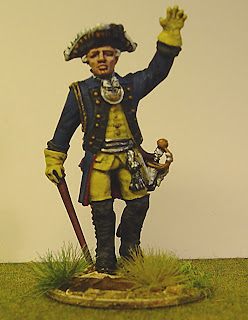 Trident Miniatures, the brainchild of Doug Carroccio of the Miniatures Service Center and sculptor Sean Judd have trotted out the Hessians for their 40mm American War of Independence range. http://www.miniatureservicecenter.com/ I had been keeping in touch with Doug for some time and making a few purchases here and there from his expanding range. I had pestered him often enough about the Hessians and then one day they arrived. Nigel Billington of 18th Century Press fame had often inspired me with his 40mm S&S Prussians and I sent him a sample of the range. His brush is far better than mine and it is his work in the picture above. http://nigbilpainter.blogspot.com/2009/11/40mm-from-trident.html

Anyways, I had been sitting on my Christmas money from the wife until now... I am staring at a mountain of 40mm Hessian/Prussian musketeers and I'm wondering what to do with them. Should I go with 1:10 individually based for BAR or 1:20 multiple based on 60mm*60mm stands? Should I go Hessian and Brunswicker for the AWI or Prussian for the SYW? I even had a thought to game in 1:5 with a homebrew ruleset of mine I call der Kleine Krieg. The idea of a 120 figure battalion in 40mm with all five flags (1 leibfahne and 4 regimentsfahne) flying is almost too much to resist. Any suggestions would be welcome.

Thanks.
Posted by Matthew Shaw at 8:32 PM